When you arrive at an airport in an unfamiliar city, do you join the line at the cab rank, or do you reach for your phone? According to a survey by CWT, the preferences of business travelers in Asia Pacific vary widely. It seems the majority of travelers from Japan, China and Australia choose taxis, while those from India and Singapore lean towards ride-hailing apps. 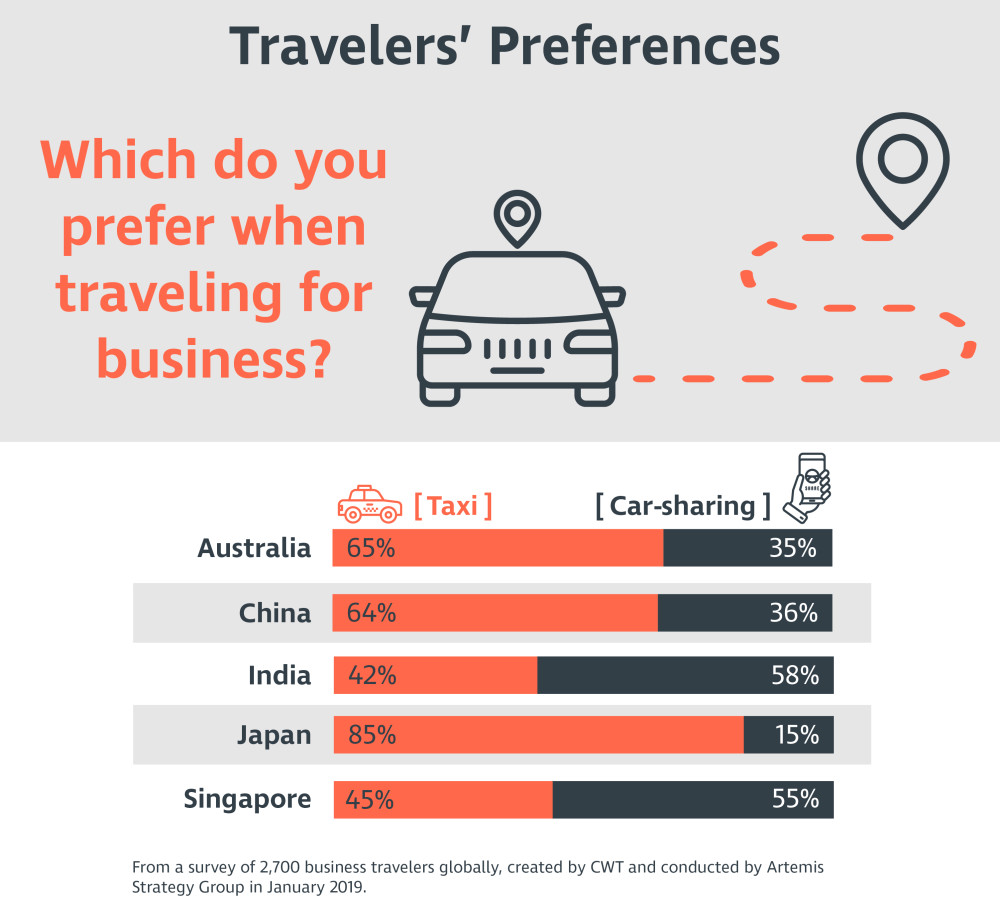 These numbers may come as a surprise, considering the widespread adoption of ride-sharing services like Uber, Grab, Didi Chuxing, Go-Jek and Ola in this region. In fact, a study by ABI Research states that Asia is the world’s largest ride-hailing market, accounting for over 70% of trips globally in 2017.

But while the familiarity and convenience of ride-hailing apps is a big draw for some travelers, for others, hurdles such as the hassle of downloading a new app, language barriers and safety concerns when traveling may make taxis the more sensible choice.

“If you frequently use Grab or Gojek to get around Singapore and you’re traveling to Jakarta where you can use the same app, you might be inclined to do so,” said Bindu Bhatia, CWT’s Managing Director for Asia Pacific. “But if you’re going to Shanghai and have to set-up a new app in a different language, would you go through the trouble? Perhaps not.”

When CWT asked travel managers in Asia Pacific about their travel policies around ride-sharing, the overwhelming majority said their organizations permit the use of these services for business travel.

The convenience, the pricing transparency and in many cases the cost means that most organizations in the region have come around to the idea. In Singapore, Japan, Australia and Hong Kong, 87-89% of travel managers who responded said their companies allow employees to use ride-sharing services. However, the numbers are slightly lower in China (80%) and India (79%). 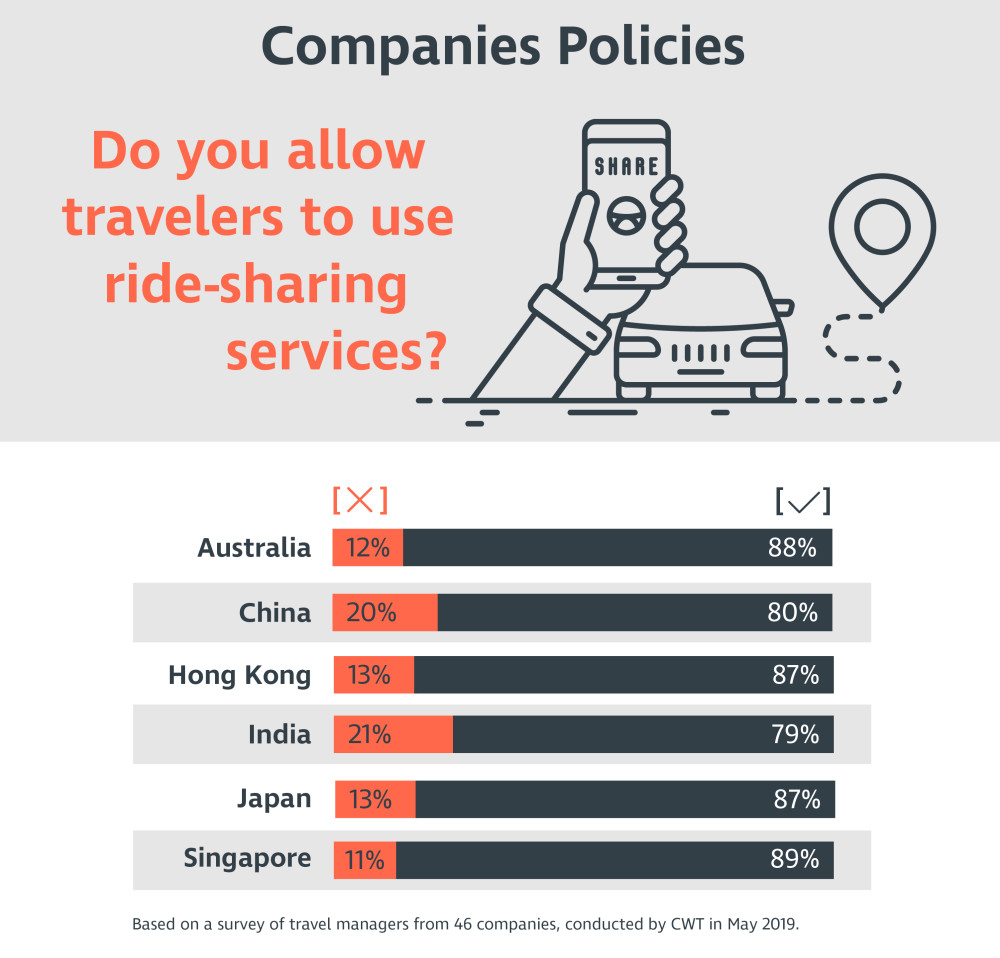 “It looks like most companies are willing to let travelers make the choice (between taxis and ride-hailing services), unless they’ve got a situation where there’s a demonstrable safety differentiator,” said Elis Kodra, CWT Solutions Group’s Asia Pacific Director.

Safety is still an area of concern

If there’s one sticking point, it’s traveler safety, which remains the key concern.

Overall, business travelers don’t seem to think one is much better than the other. A CWT survey from last year found that business travelers tend to feel almost as safe using a ride hailing app as they do using a taxi. Forty-three percent of business travelers from Asia Pacific surveyed said they feel somewhat or very vulnerable about their personal safety in ride-sharing services, compared with 39% for taxis.

Women tend to be more concerned about both, and the difference is a little more pronounced. Looking at ride-sharing, 56% of women responding in the Asia Pacific region said they feel very/somewhat nervous about ride-sharing, while 48% worry about taxis. For men, it’s 38% and 35% respectively.

Uber, Grab, Ola and Didi have all added emergency buttons in their apps, as well as ride-tracking which allows passengers to share their trip and location in real-time. In September last year, Didi introduced in-trip audio recording. A month later Grab announced it would double its investment in safety by the end of 2019, introducing new initiatives and features such as using data from the app to measure driver fatigue.

Ride-sharing companies have seen the tremendous growth opportunity that corporate travel represents for their businesses. In addition to beefing up their safety efforts, nearly all the major players – including Uber, Grab and Ola – have launched services targeted at corporate customers, which allow travel managers to set ride policies, automatically pay for journeys and keep close track of expenses.

But ground transport remains largely unmanaged by corporate travel programs in the region, according to Mr. Kodra. “This is an area where organizations may feel it’s very difficult to create and enforce policies, and sometimes the rewards aren’t perceived as being great. In reality, it’s not much different from managing an air or hotel program, and there’s a lot of potential to drive savings and manage risks.”

“The first step is to capture data around your travelers’ usage of ride-sharing services, either through credit card statements or expense reports. That’s already half the battle won. You can then start identifying opportunities to work with these suppliers, and also spot the red flags in high-risk locations.”

Once companies have a handle on the data, the next step is to establish some guidance and boundaries for their travelers.

“It’s generally a good idea to give travelers choices, provided they are coupled with clear policies,” said Ms. Bhatia. “You should factor in your organization’s corporate culture, traveler demographics and risk management policies, among other things. Then create policies that define if, when and how travelers can use ride-sharing services, and communicate these to your travelers.”

Research by CWT, the B2B4E travel management platform, shows that 71% of global business travelers embrace travel innovation. Travelers from the Americas and Asia Pacific are more likely to favor it, with 75% and 71% respectively. Europeans are warier of the changes – 7% of them stating a reluctance to embrace travel innovation versus 5% of Asia Pacific and 3% of Americas travelers.